Since the American Platinum Eagle was introduced in 1997, the United States Mint has offered proof versions of the coins for collectors. These have typically been minted in smaller quantities than the bullion versions of the coins and carried annually rotating reverse designs for different themes.

Proof coins are created by the US Mint through a special production process using adapted coining presses and polished dies. Specially prepared coin blanks are hand fed into the presses and struck multiple times. The result is to bring forth all of the details of the coins in highest clarity. Proof Platinum Eagle coins are produced with a cameo finish. The raised elements of the coin are frosted, while the background fields are mirrored. 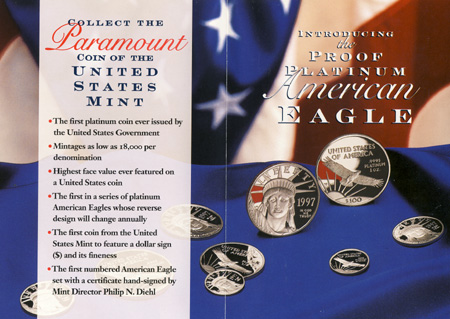 Each year the US Mint has offered the American Platinum Eagle proof coins for sale directly to collectors. From 1997 to 2008, the coins were available in one ounce, one-half ounce, one-quarter ounce, and one-tenth ounce sizes, sold individually or as part of a four coin set. From 2009 to present, the US Mint has only offered a single one ounce proof coin.

Starting in 1998, the Proof Platinum Eagle coins began to carry an extra distinction from the bullion version of the coins. Each year, a different reverse design has been used with a unique design. Across various years, the US Mint has featured reverse design series for a certain theme. The “Vistas of Liberty” design series issued from 1998 to 2002 depicted the bald eagle in different landscapes across America. The “Foundations of Democracy” series issued from 2006 to 2008 presented the three different branches of government.

The most recent design series highlights the core concepts of American democracy as found in the Preamble to the Constitution. The six year design series began in 2009 and will conclude in 2014. The designs created for the series are inspired by narratives prepared by John G. Roberts, the Chief Justice of the Supreme Court.