The United States Mint’s platinum investment and collector coin series continued with the issuance of the 2005 Platinum Eagle (Buy on eBay). The bullion versions were made available through a network of authorized purchasers based on the market price of platinum plus a mark up. The collector versions were offered directly by the United States Mint at higher fixed prices.

The 2005 Proof Platinum Eagle (Buy on eBay) coins were offered by the United States Mint starting on April 7, 2005. This launch date was more than five months earlier than the previous year. The same pricing and maximum mintage levels were maintained for each of the individual proof coins and the four coin set. The US Mint experienced higher sales across all product options, reversing the trend of steadily lower numismatic sales for the program.

The reverse design featured on the proof coins was designed by Donna Weaver and features a collection of design elements representing the bounty within the borders of America. An eagle appears with a shield, olive branch, and thirteen stars above. Below is an overflowing cornucopia intended to embody the good fortune of a strong and abundant harvest.

The market price of platinum began the year around $850 and was relatively flat for the first half of the year. In the second half, the price rose steadily and peaked above $1,000 per ounce, before declining in the final month of the year to close at $965. The average price for all of 2005 was $896.87. 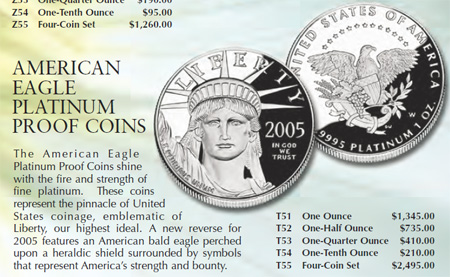