In 2014, after a gap of more than five years, the United States Mint finally resumed the issuance of the American Platinum Eagle in bullion format. The coin was also issued in proof format for collectors, completing a six year design series exploring the core concepts of American democracy.

From the introduction of the series in 1997 through 2008, the United States Mint had annually offered Platinum Eagle bullion coins in one ounce, one-half ounce, one-quarter ounce, and one-tenth ounce sizes. Although sales figures never reached the levels of the more popular gold and silver bullion offerings, the coins represented an accessible means for members of the public to invest in physical platinum. In late 2008, the US Mint announced a temporary suspension of platinum bullion offerings in order to divert production capacity to gold and silver coins. The platinum bullion coins would ultimately be cancelled and not struck or issued for the next five years from 2009 to 2013.

In early 2014, the US Mint announced the return of the platinum bullion coins, which would be produced in one ounce size only. The 2014 Platinum Eagle (Buy on eBay) officially went on sale to authorized purchasers on March 10, 2014. On the first day of availability, orders were received for 8,500 coins, reflecting the pent up demand for the product. However, the pace of orders for the remainder of the year was tepid with final sales reaching 16,900. This fell below the sales levels of the one ounce bullion coin when last offered in 2008.

The American Platinum Eagle bullion coins feature a portrait of the Statue of Liberty on the obverse paired with a soaring bald eagle on the reverse. Although different reverse designs have been used for numismatic versions, the bullion coins have always featured the same design.

On October 20, 2014, the US Mint began accepting orders for the 2014 Proof Platinum Eagle (Buy on eBay). This collector coin featured the final reverse design within the six year “Foundations of American Democracy” design series. The theme for the year was “To Secure the Blessings of Liberty to Ourselves and Our Posterity”. The design carried a depiction of Young Liberty carrying a torch with the sun rising in the background over a gentle landscape. The reverse was designed by Susan Gamble and engraved by Joseph Menna.

The proof coin was initially priced at $1,600, although the price varied throughout the course of the offering based on the average market price of platinum. A maximum mintage of 15,000 pieces was established, matching the level used for the prior three years. Each coin was packaged in a tri-fold portfolio presentation case and included the narrative written by Chief Justice John G. Roberts which served as the inspiration for the coin’s design.

Initial sales for the offering were stronger than the prior year with 3,341 pieces sold during the first week of availability, but the pace of sales soon slowed. When the coins were eventually removed from availability, the last reported sales figure showed total distribution of 4,596 coins. 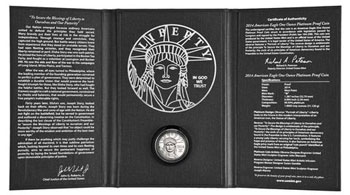